This is a collection of the title novella, a collaboration, and one short story each by the two named authors. The novella is a variation of a familiar horror theme – a mysterious figure arrives in a small town and almost immediately some of the residents begin murdering and mutilation others. It’s a kind of deal with the devil story mixed with contagious madness. The story is quite well told, if not the most original idea. The two stories are both entertaining as well. This is designed to be a collector’s item, so the price is pretty steep for the relatively short amount of text. 12/24/16

Holmes and Watson investigate a series of deaths in which people become completely emaciated overnight. Holmes has a dream quest in which he visits the other universe where Cthulhu and his minions have been exiled, while Watson struggles with memories of a clash with reptile men in Afghanistan. They sense a human villain moving behind the scenes, and of course it is Moriarty, who has acquired forbidden knowledge and is on the verge of evoking apocalyptic forces. A slightly different take on the Holmes sub-genre, first in a trilogy, and very well done. 12/17/16

With a Voice That Is Still Often Confused But Is Becoming Ever Louder and Clearer by J.R. Hamantaschen, Createspace, 2015

This is a collection of stories that is ostensibly horror, although only a few instances of actual horror occur. Most of the protagonists of these stories are fearful of life, of their own shortcomings, of their past deeds and possible consequences, and other causes that are primarily psychological. They are generally well written though a couple of them seemed too long for their content. I suspect that this is a book most readers will enjoy more if they dip into it periodically rather than reading straight through, particularly given its predominantly downbeat tone. 12/15/16

A family whose patriarch once encountered the Jersey Devil – a kind  of flying horse/dragon monster about whom legends actually do exist – and he wants a second chance to kill it. A rash of sighting seems to indicate he will get his chance. But it turns out there is not just one but an entire horde of the creatures and there is wholesale slaughter before the end. The horror action is fairly routine. Personally I have always found the Jersey Devil to be funny rather than scary, and that colored my reaction. The book also suffers from monster overkill. There is just too many victims and too many monsters to work as a suspense novel. 12/14/16

This is a famous collection of stories of the occult, although they are mostly sentimental rather than suspenseful. Beck’s ghosts are helpful or sad rather than menacing. The title story and “Waste Manor” are probably the best. Some of them seem dreadfully padded and the supernatural elements are occasionally almost an afterthought. The author was interested in the spiritualist movement of her time, so the muted and almost intellectual attitude of the stories is not unexpected. 12/9/16

The Hand of Kornelius Voyt by Oliver Onions, Valancourt, 2013 (originally published in 1939)

This is a curious but ultimately boring novel by the author of “The Beckoning Fair One” and other ghost stories. A young orphan is taken into the home of a deaf mute and introduced to a rather odd training system. His new guardian, Dr. Voyt, has developed unusual mental abilities. He can see what happens anywhere in the house without leaving his room, he can make inanimate objects move by the power of his will, and he can inflict pain from a distance. And he has plans for his new ward. Nice opening, but the story bogs down fairly early and never gets going again. 11/29/16

Uncanny Stories by May Sinclair, Wordsworth, 2006

Eight stories of the supernatural, although none of them are very suspenseful. Sinclair was a kind of bridge between the Victorian era and the modern one. Her stories are largely psychological and the fantastic element is often ambiguous. Her ghosts are objects of sympathy rather than terror. One of the stories is an odd speculation on the metaphysics of heaven and creation.  I was not particularly fond of these stories except one about a lonely ghost in a library. They tend to be long winded, unfocused, and more style than substance. 11/26/16 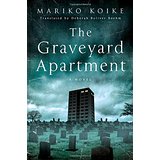 A young couple and their five year old daughter move into an apartment complex built adjacent to a graveyard. Despite the advantages of the location, only half of the apartments are occupied, and a general feeling of dread - in some cases linked with actual unexplained phenomena particularly in the basement - the building is rapidly emptying. There are strange interferences with television, a balky elevator, cold spots, and other oddities. The family are the last people living there and they are trying desperately to leave, but whenever they find another location, something horrible happens to forestall their departure. Japanese horror has a different tradition, so where western readers expect to find out just what is going on and why, that's not true in a lot of Japanese stories and movies, and this is no exception. Nor do we ever discover the limits of the powers of the evil force. That aside, this is suspenseful, creepy, and well written. 11/25/16

Vampires remain very popular in contemporary fiction, although largely in the romance genre in recent years. This is a collection of short stories that explore various aspects of the vampire legend, and generally these vampires are not nice creatures at all. Best of the lot is the title story, a sequel to Bram Stoker’s original. Ten other stories play with different powers, different aspects of the legend, and different tones including humor. The authors have a few surprises lurking in these pages and despite the common theme, the stories themselves are reasonably varied. 11/1/16

Psychic detectives were once quite popular. This is a collection of Arnold Rhymer stories. Rhymer solves his mysteries in a vaguely Holmesian manner – particularly the last two which contain no supernatural elements. He also fights vampire mummies directed by German spies, psychic drugs, materialized dead people, and various others menaces. The stories are okay but occasionally awkwardly done, and since they were written during the latter part of World War I, there is a very strong anti-German sentiment in a couple of them. Of more historical interest than entertainment value. 10/29/16

A supply ship in the Arctic has engine trouble and is caught in the ice. All the crew members except one become increasingly sick and the radio isn’t working. Supplies are dwindling. Their only hope may be an object seen in the distance, also surrounded by ice, so after various vicissitudes a part sets out to find out what it is. And what they find is very bizarre indeed. I can’t say too much about the plot without revealing too much. The mystery is very well designed and creepy. The pace is a bit slow in the first third of the book – a little foreshadowing would not have been out of place – but once the party leaves the ship, things become very engrossing indeed. Excellent, particularly for a debut novel. 10/9/16

Cummins wrote only for a short period of time and nothing is known about him other than these stories and one other uncollected one. He was very bad at endings and a lot of these – all of which are quite short – have truncated and exasperating endings. They range from SF to Horror to the mundane, and several involve some sort of joke. The prose is quite good, however, and it’s a shame we have such a small sample of the author’s work upon which to judge him. The latter half of the collection is better than the first. 10/1/16