Despite the title, less than half of this book is horror stories. There is SF, fantasy, and a few that aren’t really classifiable. That said, there is a lot of good writing here, and some of the entries create really disturbing images. The title story is probably the best in the book, but I also liked “Shika” and “The Uncertainty Principle” a lot. A few of the stories are satirical and few of them are written in a purely realistic style, which is not necessarily a bad thing, although I think it’s a mistake in most horror fiction. I had only read two of the stories previously, so this was a pleasant journey through new territory. I would happily buy more work by Boyczuk. 8/29/15

This is a fairly large collection of stories by a writer probably not well known in the US – at least not yet. I doubt that situation will last.  More than half the stories are horror and about a third really don’t fall into any easy categorization. They involve strange encounters, insanity, a post apocalyptic nightmare, sadism, broken relationships, child abuse, and other themes that work more on a psychological than physical level. There are no vampires or werewolves and even the occasional ghost isn’t what we ordinarily think of when we hear that label. Best in the collection are “Shark! Shark!,” “At Night, When the Demons Come,” and “Bones of Crow.” This is a very good selection of stories. 8/26/15

A software company hires a mysterious consulting firm to turn their finances around, but Mr. Patoff is not your ordinary consultant. He seems omniscient and capable of inhuman bursts of activity. A problem I have with a lot of the author’s work is something he does intentionally; his characters do not act realistically when faced with extraordinary situations. In this case, there are clear indications that Patoff is acting illegally, and no one objects, and unnaturally, and no one seems to really comprehend it. This creates an effective aura of unreality, but it also makes it impossible for me to have any sympathy for the characters, since they aren’t quite human beings. For example, one of the employees is killed in what appears to be an accident at work, but there is no investigation by OSHA. People are filmed and recorded without their permission, and no one objects. The president of the company signs a contract by which he cannot fire the consultants for ANY reason. Eventually I just lost interest and barely made it to the end. Those not bothered by this device should like it better. 8/24/15 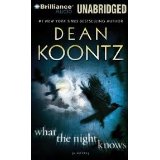 Over the last twenty years or so I have come to expect a strong element of suspense in every Koontz novel I read. I’m not sure what happened this time. The premise is that a serial killer’s ghost has returned  to repeat his crimes and the protagonist/detective has intuited that his family is on the list of prospective victims, although we never really learn how he figured that out. The first and most glaring problem is that there are three children as viewpoint characters in addition to the two adults, and they don’t act or feel remotely like children. On top of that, we have been told about how united and sharing the family is, but when the supernatural events start occurring, all five of them refuse to mention their experiences, which helps the plot along. The plot itself is so predictable that even sequences which should have been creepy are not. Nor could I figure out what limitations there were constraining the spirit – which can turn mirrors into doorways, manifest itself physically as a human body,  show up in photographs, possess living humans, travel about in either animate or inanimate objects, invade dreams, etc.  Even worse, its abilities change during the course of the story. We’re told it can only control one body at a time, until the climax when it occupies two. We’re told it can move through anything artificial, but it needs a car to move around the city. Why can’t it move through the road itself? During the climax, it reanimates a dead body. If it had that power, why was it frustrated in an earlier attempt when it possessed a gunman who was shot and killed? We’re told it kills in 33 day intervals, but then it launches its final attack out of schedule. And then there’s the silly ghost dog that really doesn’t serve much purpose, or the elaborate fantasy world scenario for one of the children, which is dropped suddenly and never brought back. And how does the hero hear a tiny bell from a far corner of his house but not hear a man shouting loudly from that same location? On top of everything else, the hero is saved by divine intervention – literally. And either Koontz or his editor should have known that people are hanged, not hung. Dreadful. 8/19/15

This series has wavered between horror and urban fantasy for a while, but it has been near the top of whatever subgenre it happens to fall into. I was surprised to discover that I have missed at least a couple of titles because I've been enjoying it. Kitty is a werewolf but a benevolent one whose career has been varied in past volumes. This one looks as though it is winding things up as the ultimate battle against the evil vampire and his minions is underway. I would kind of miss it, but on the other hand I've liked the author's non series work as well and it would be interesting to see which way she turns next. For her fans, however, this is a rousing, exciting, and satisfying windup to Kitty's shapechanging career. 8/8/16

This is a Jim Rook novel. Rook is a psychic who works as a college instructor, although it’s hard to tell because Masterton has a rather muddled concept of the American educational system. He refers to it as a college, but the students are clearly caricatures of high school students, and high schools don’t have recess or resemble his setting any more than do colleges. Anyway, this time he battles a demonic force that can bring the dead back to life and alter the flow of time so that he is repeating days, in which events have been altered, and doesn’t know what to expect next. It’s one of Masterton’s less interesting books. 7/31/15

John Wayne Cleaver, the demon hunter, returns. Cleaver is no long a lone avenger battling the forces of evil. He works for a secret government agency which finances and supports his campaign. He is so effective in fact that the forces of evil begin to notice that something unusual is thinning their ranks. Cleaver himself has grown tired of the violence and death and if he had his way he would retire to some more peaceful pursuit. That, obviously, is not going to happen. But ultimately he rises to the occasion. There are a few new twists in the story, which sometimes feels more like urban fantasy than horror, but the basic premise hasn't changed. His female companion in much of the book is a particularly interesting character. 7/28/15

This is a collection of stories set in the world of Clive Barker's Cabal, which was filmed as Nightbreed. I should say up front that although I like almost everything I've read by Barker, this particular story is not among my favorites. Several of these stories, in fact, were more interesting and entertaining so it may just have been that I wasn't in the right mood when I read it. The premise is that werewolves and other monsters are real and that they are in hiding from humanity because we are even worse than they are. There are quite a few good stories here including those by Nancy Holder, Weston Ochse, Amber Benson, David Schow, and Lilith Saintcrow, and the rest vary from mildly entertaining to almost very good. The treatment varies from one writer to the next as they explore the possibilities and expand on the description provided in Barker's work. I recommend reading Cabal first. 8/28/15

A trainee at a real estate agency notices something odd about several properties which are reserved for sale by the owner of the firm. He and another employee visit one of them clandestinely and the other man is literally sucked into the walls. One of the other properties was taken by imminent domain and is found to contain the bones of dozens of people, killed over an extensive period of time. The young realtors set out to expose the danger to the police. Although there are some chilling scenes in this one - which features an animated wooden statue - the plot doesn't hold up. There is no way that they could convince the police to investigate their suspicions, and it is doubtful they would venture into further pieces of suspicious property after being menaced so strangely on their previous visits. It's also very convenient that one of them has an uncle who just happens to have arcane knowledge that helps them in their investigation. This one requires a pretty drastic suspense of disbelief. 7/23/15

As far as I know, this was the only young adult novel Masterton has written. The gimmick is that demonic possession has focused upon the cut hair in a salon. The teenaged protagonist is possibly the only one who has an inkling of what is going on, and there has already been one mysterious murder. Only Masterton could probably make the rather silly premise actually feel menacing, but it's still not as gripping as his adult work and is more a curiosity than an entertainment. 7/19/15

William Meikle has been chronicling new adventures of psychic detective Carnacki, created by William Hope Hodgson. This new collection consists of about half reprint, half new material. Historical figures like Winston Churchill pop up in some of these stories, all of which involve occult events of various degrees of severity. Some are more fantasy than horror. There are ancient curses, restless spirits, and other manifestations of the supernatural world. There's an occasional hint of Lovecraft and other stories that owe more to the mystery genre despite their fantastic content. Very nice illustrations by M. Wayne Miller. "Captain Gault's Nemesis," "Bedlam in Yellow," and the title story were my favorite. 7/18/15

The previous book I encountered by Ben Tripp was a zombie apocalypse novel, and I enjoyed it, which is an unusual recommendation in itself. This one is an unusual vampire novel. The protagonist is an antiques dealer who is aware of the supernatural and knows that vampires often accumulate valuable collections of antiques. The problem is that while he is aware of the existence of a powerful and long lived vampire, the converse is true and the vampire is interested in adding the protagonist's property to his own collection. So he organizes a group of varied people to help him kill the undead creature first. This felt more like an adventure novel than a horror story, and there was less of an element of suspense than I would have liked. Worth reading, but I actually thing his zombie novels were better. 7/14/15

Ronald Malfi is one of the handful of writers whose work I actively look forward to. Sometimes he comes up with a really interesting idea, sometimes he uses a familiar one in an interesting way. This new one is a ghost story and the setup is pretty traditional. Husband, wife, and young daughter go to tidy up the wife's father's estate after he apparently succumbs to dementia and throws himself out the window. But the daughter finds a friend her own age whose origins are strangely cloaked. The story leads us to believe one explanation, then switches to another, and still another before it ends. Most of the creepiness is psychological rather than physical but it's still very effective.