This is a discussion of what personal power is, how to acquired it, and how to make use of it. I first read this shortly after getting out of the army and used some of the techniques described at my job, and some of them definitely worked. Some of the anecdotes including to illustrate points are priceless. I did find it rather overheated a lot of the time, and oversimplified in some cases as well. Applying some of his analysis to our current political leaders can be enlightening. 7/24/20

A Coney Island of the Mind by Lawrence Ferlinghetti, New Directions, 1968

Over All the Obscene Boundaries by Lawrence Ferlinghetti, New Directions, 1984 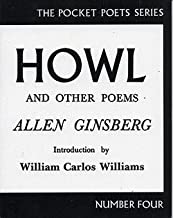 I have read very little poetry in recent years, having drifted away somewhere along the way. The discovery that Ferlinghetti is still alive kept recurring to me so I brought in the three of his collections that I own, plus the only Ginsberg title I ever read.  The first of these is probably his best known title, although it is actually a quote from Henry Miller. I think it’s the best of the three Ferlinghettis. He was also a painter and many of his poems are nicely evoked scenes. “I Am Waiting” is one of my all time favorite poems. The second consists of poems of varying lengths and formats. The most memorable line is “the final war is over again.”  They generally deal with the author’s travels in America. The third book contains several poems set in Paris and Italy, and quite a large proportion deal with romantic love, although as with the others, they are predominantly snapshots of experiences. A few of them are entirely in French. I generally enjoy the shorter ones best but the extended poem about two featherless birds is my favorite in the book. The Ginsberg book was seized as obscene and was the subject of a long trial, which the government ultimately lost. I was not as impressed by Ginsberg, then or now, although the title piece in this collection is very powerful. 6/2/20

Another guide whose text is largely devoted to state and national parks, where they are and what facilities they have. The value of the books is that they are prolifically illustrated with full color photographs. When I was a child, my family vacationed in this area one year and I still remember impressive vistas from the Skyline Drive and other areas. There are quite a few mountain landscapes in the book, though not as many as I had expected. There were obviously lots of places in Virginia and Maryland that we did not visit, and except for one short trip to the western part of the state, my only experience of North Carolina has been to drive through it on the interstate. 5/26/20

The Southwest by Jake Page, Smithsonian, 1995

This is the guide to parks and scenery in Arizona and New Mexico, and you might expect a lot of the gorgeous photographs are of desert scenes. But not as many as you might think. I have limited experience of that area and was surprised at the diversity of environments to be found in a relatively small geographical region. As usual, the text consists mostly of advisories about the parks, but I believe this is the same Jake Page who wrote some alternate history fiction some years ago. 5/19/20

I have read so many essays about the work of Philip K. Dick over the years that it seems unlikely anyone will have anything particularly new to say. This is a collection of essays that make the attempt, and a few of them actually did seem quite insightful. The contributors include Tim Powers, Jonathan Lethem, James P. Blaylock, and a couple more familiar names. The discussion of Galactic Pot-Healer I found interesting as I have always considered it one of his least significant efforts. The essays left me with a yearning to find time to fit a re-read of the author into my schedule. 3/31/20

Another in a series of guides to parks that I frankly read mostly for the pictures. This one covers West Virginia, Kentucky, and Tennessee and I have not been to any of the places it covers. For some reason this volume is much more oriented toward animals than has been true in others I have read. The few landscapes did not entice me. I was puzzled at the complete lack of coverage of caverns. The text is competent but not particularly engaging.  3/27/20

This is a collection of essays dealing science fiction and fantasy writers from various periods in the history of the genre. Each is analyzed from an academic perspective, although for the most part the language is quite accessible to the lay person - not always the case in this kind of book. I found nothing to argue with in any of the essays - which is also unusual - although they varied in interest for me. I have never quite understood the popularity of Olaf Stapledon and David Lindsay. On the other hand, the discussion of Clarke's Childhood's End and the works of James Tiptree and Fritz Leiber contained interesting insights. Other topics include William Gibson, H.P. Lovecraft, and Mervyn Peake. 3/24/20

Another Smithsonian guide to flora and fauna in parks around the country. These are of interest primarily because of the beautiful photography, which in this volume includes a number of waterfalls. It covers New York, New Jersey, and Pennsylvania. There is an interesting write up of Presque Isle in Pennsylvania, which I’ve visited a few times. One picture has the World Trade Center in the background, which is kind of eerie. This is meant to be a guide if you plan to travel in the area, so much of the text is otherwise of no interest. 3/18/20

Ghosts and hauntings are nonsense, but a lot of people believe in them, or pretend to do so, and there is a lot of interested in haunted places. This slim little book examines some of those rumored places in Davenport and Mettendorf in Iowa, and in Moline and Rock Island in Illinois. There is information about the stories involving each place, and lots of photographs, and some of the stories are actually inherently interesting in themselves. This is also a part of the country I have never visited so I found the occasional bits of local color interesting. You don't have to believe in ghosts to find this entertaining. 3/13/20

The title of this one is misleading. It would take volumes to discuss that subject. In this case, we just have a collection of unrelated essays about horror fiction drawn from periods as early as the gothic era and as late as the present. There is no unified theme. So there are discussions of Ann Radcliffe, World War Z by Max Brooks, Night of the Living Dead - which is a movie and not literature, and general essays about thematic similarities and other attributes of the genre. A few of the essays are interesting, most only if their subject matter has a particular appeal, and a few are written in such thick academic language that they were almost unintelligible. 3/3/20

A collection of essays about the vampire in popular culture. Like most of these collections of academic essays, the writing varies from entertaining to awkward. They are generally more interesting than one might expect, given how much attention has been paid to vampire fiction in recent years, but these are designed to look at how different parts of the world and different cultures treat the phenomenon. The focus is on movies rather than literature, which I found disappointing, and Asian vampirism is not examined in any depth. Worth reading, but perhaps given the price you might urge your local library to acquire it. 2/13/20

Another guide to fauna and flora, with details about state parks and other scenic areas. This one deals with Vermont, Maine, and New Hampshire, so I had actually visited some of the places that are mentioned. The color plates are the main attraction as usual, and there are also useful maps and directions, This is more than twenty years old, so some of the information is outdated. For example, they assume that the Old Man of the Mountain in New Hampshire is still there, but it collapsed a couple of years ago. 1/21/20

The Technique of the Mystery Story by Carolyn Wells, 1913

As Wells was embarking on her career as a mystery writer - over eighty novels - she wrote this often interesting discussion of the recent history and various aspects of the mystery story. Even then she was able to identify several elements as overdone - locked rooms, secret passages, etc. - and suggested writers should avoid them in the future. As it happens, she disregarded her own device and these became standard elements in her own detective novels. Some of her observations are amusing - detectives must be from the wealthy, educated class for example. Quite readable, and she mentions a few novels I've added to my want list. 1/16/20

We tend to forget that there was a good deal of support for Hitler in the US during the 1930s. Antisemitism was rampant and isolationism was a powerful political force. The book examines different aspects of it, including German clubs and organizations, suborned members of Congress who were actually taking money from the German government, business people like Henry Ford who considered himself a personal friend of Hitler, talk show hosts like Father Coughlin, spies and propagandists working out of the German embassy, student protest movements, and so on. There was even an abortive effort backed by some bankers to overthrow Roosevelt’s government and set up a fascist state. Not to mention German attempts to manipulate voters to defeat his bid for re-election. A lot of things in the narrative are very similar to things happening in our political struggles to day, frighteningly so. 1/8/20

One of a series of guides to the natural world in selected parts of the US, profusely illustrated with full color photographs and a few drawings, with text describing the wildlife and geographic features. Much of the book is devoted to describing the various national and state parks that you can visit in the area, although the current administration’s plans to sell much of this land to be developed may make some of it outdated.  The text is largely interesting, but sometimes too much of a travel guide and less descriptive. 1/3/20